6. Convection and the thermohaline circulation

As an “entrée” for the next chapter, I wanted to share some thoughts about oceanic convection.

I got to think about this topic, when discussing atmospheric convection with an oceanographer. It seemed better to talk to him about his field of expertise, so I tried to apply my ideas to the oceans, and the result was enlightening at least.

The basics
I think there are two basic laws of thermal convection:

The picture shows heat sources A and B, and heat sinks C and D.

Basic convection in a fluid

According to the basic laws, the convection will be “trapped” between levels E and F, determined by high heat sink C and low heat source A.

Heat source B will only heat up the water above level F, as heat sink D will only cool it below level E. Both don’t contribute to convection in any way.

Powering the ocean conveyor belt
This Basic Convection graph already showed that the tropical heating up of the oceans cannot contribute to convection. The cooling at the poles is a certain driver, but without a lower heat source, the ocean will fill with cold water and stop moving. There can only be a very thin superficial current from the tropics towards the poles. 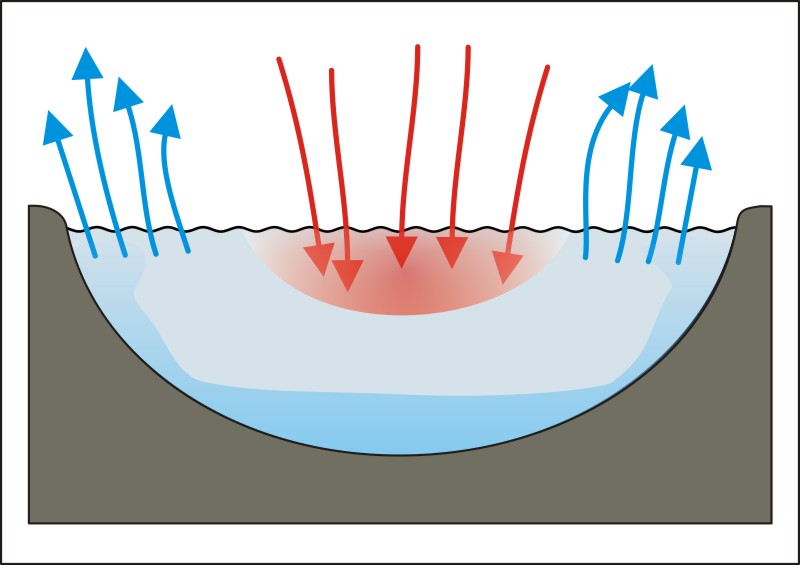 So what could be this mysterious heat source deep in the oceans that powers the conveyor belt?

I can imagine three possibilities:

1. Earth heat
This source is very weak, and if it would be the main driver of convection, the currents would be symmetrical, similar to the Hadley cycles. 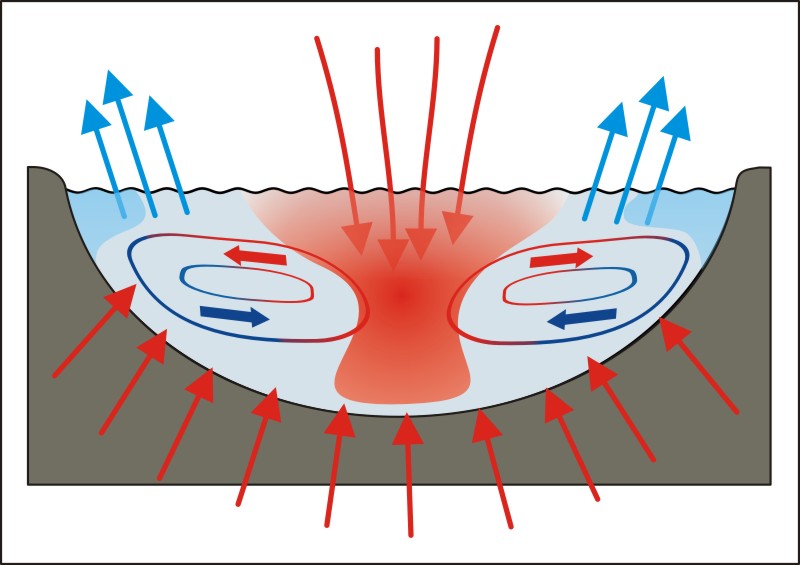 2. Salty downwards currents
Since most of the evaporation is done at the tropics, that is where this downward currents of heavy salty water would occur. Again a Hadley kind of symmetrical current would be the result. 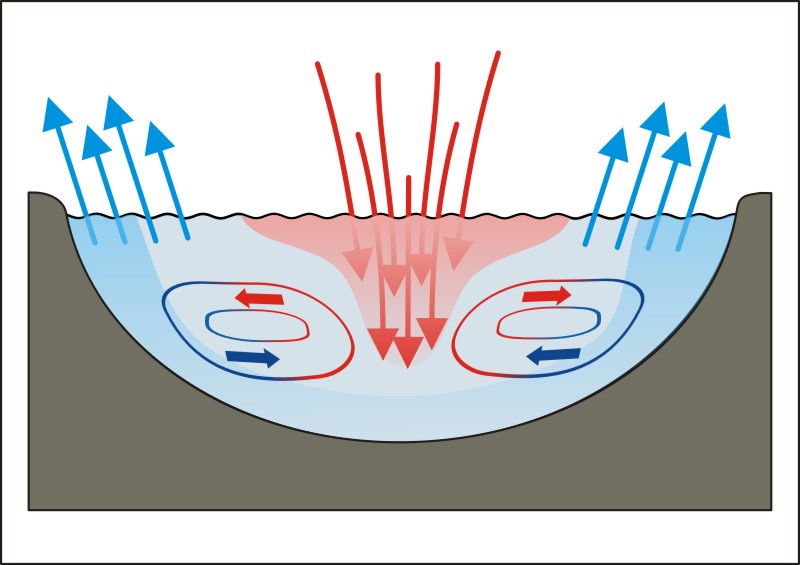 3. Mixing by other forces
A short browse on internet provided some assumptions about the vertical oceanic mixing influence of steady winds and tidal influence of the moon’s gravity.

A 3D picture shows where exactly the upward flow starts, which is where the heat source has to be:

Upwelling in the Pacific Ocean, resulting from external forces?

If there is a circulation in the pacific ocean that is caused by the moon’s gravity and/or steady winds, this is a very likely driver of the conveyor belt. The form of the “loop” somehow suggests that.

Salinity
Of course the conveyor belt is influenced by salt content (hence it’s other name “thermohaline circulation), but I cannot imagine that this is a main driving influence: normally all this evaporated water returns as rain to the surface it evaporated from, and does so quite close to where it evaporated, so that cannot cause really great differences in salt content. Only if rain falls on land and is transported to another ocean, the source ocean’s surface gets salter. But this seems hardly ever the case.

When you look closely, the surface salinity of the conveyor belt is 35 to 36 along almost all it’s journey. It even seems to avoid the pleaces of highest salinity.
So, in relatively “stationary” parts of the ocean, where there is no conveyor belt, and hardly any vertical mixing because of the high surface temperature, salinity wil eventually increase due to the part of evaporation that is lost. It is hard to find a powerful driver of the belt in that.

Conclusion
So my candidate driving force is the low heat source that is the result of vertical mixing by tidal forces and/or wind.

The oceanographers I talked to since I wrote this chapter agreed on this. And in 2014 there was a very clarifying article in Nature by Raffaele Ferrari that came to the same conclusion. However, Ferrari states that there is still a lot of uncertainty about the forces behind the mixing.