Welcome to ClimateTheory.net, the forum about my attempt to model climate in a completely new way, aiming to – eventually – calculate the real climate sensitivity of CO2.

This site was hastily and somewhat prematurely constructed in May 2012 in an attempt to present my thoughts about the mechanisms behind our climate to researchers that I planned to meet at the Heartland ICCC7 meeting in Chicago.

One year earlier, in 2011, I became as excited as astonished when the new approach of modelling climate that I tried, appeared to give remarkably accurate and plausible results. I decided that, with such a good outcome, I should try to have real climate scientists have a look at it.

In the first five chapters, I explain my theory and the modelling that I did. In the next four chapters I am proposing thoughts that I am working on, while trying to get a grasp at the feed back mechanisms of an increase in CO2 concentration. In the last two chapters I present two cases in which I use the Fireworks calculations to provide new insight in the radiative aspects of the Hadley Cell and the so called “Missing Tropical Hot Spot”.

I realise that the core of my model (the so called Fireworks simulation) is so different from the calculations that every climate scientist has based all his or her scientific work on, that this site will only appeal to those of you who are prepared to really think outside the box.

Although I feel comfortable sharing the line of thinking that the model is based on with you, I know that – for the time being – I had to do a lot of unfounded assumptions and use a lot of questionable data while I was building a working model. I hope you will look past these inaccuracies, as far as they don’t affect the basis of the model. I am the first one to stress that this means that the outcome of the model has a limited reliability.

In fact, an important goal of this forum is to improve the assumptions and get the input data right, with the help of the visiting scientists.

Those of you who “survive” chapter 1, will certainly love chapter 2, where I show my fabulous new toy. I will even let you play with it, and I promise it will be great fun! 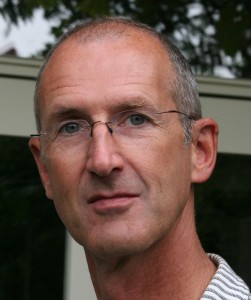 My personal background
I have my degree in Industrial Design at Delft Technical University, and I have been running my own engineering company for over 25 years now. Inventing new principles is my daily work, which has resulted in dozens of patents.  So I am an inventor, not a climate scientist.
On top of that, my understanding of physics does not exceed the basics by much.
I don’t claim to have more knowledge than the mainstream scientists. I don’t even know what my theory will result in, when it would be fine tuned by experts. It might as well show a higher climate sensitivity of CO2 than 1 degree, as a lower one.
I just think I may accidentally have stumbled upon something that could really help understanding climate a lot better.

History
Since over 15 years I have been active in the field of energy efficiency, f.i. by trying to develope new types of SOFC fuel cell systems, biomass gasifiers, and combustion engine improvements. Because of my knowledge of hydrogen I was drawn into the Hydrogen Economy discussion (as a H2 sceptic), and from there into the climate debate.

I was getting more and more irritated by the misty nature of the climate debate: nobody could prove anything, we just had to believe the outcome of really complex models that actually nobody really understands. And a lot of discussion was about physical principles that did not clearly appear to relate to the way climate actually worked.
I felt I needed to get a notion of the basic way IR radiation and latent heat transport worked.
So I started developing simple building stones that could form the basis of a more comprehensive understanding of climate. That way I would at least more or less understand what everybody was talking about.
That was all I intended when starting this modelling project.

In my search for knowledge I found out, to my great surprise, that hardly anybody was able to answer my simple basic questions about radiation and the atmosphere, neither climate scientists nor physicists. Eventually all my remaining questions were answered by Mr Noor van Andel, who has been very supporting and helpful in my attempts to fathom climate.

It took me a year to get enough building stones to start modelling (of course all that in my rare free moments: running my company doesn’t leave me with many of those…).

Then during the modelling I got really impossible results. It took me another three months to find my mistake. After fixing it, the results suddenly were astonishingly accurate, even though my input data were still questionable.

Slowly I started to realise that my approach was fundamentally different from mainstream science, and infinitely more simple. Maybe more people might benefit from my work. So I decided to go public.

Forum
I chose to organise the site as a forum, because your input will be an important part of it.
As for now I will allow everybody to react, although there is a moderation queue.

But knowing the way internet forums have a tendency to divert into chaos, I intend to restrict access to the discussion to supporters and critics who play a constructive role in the debate, as soon as I don’t like the way it is developing.