The Fireworks approach on ClimateTheory.net

Notification (January 2021): this site is currently under (re-)construction, so content may change from day to day

The innovation that is the core of the www.climatetheory.net  site is “The Fireworks atmospheric radiation simulation”.
It is an easy to understand Excel spreadsheet that can calculate exactly how much radiation is emitted into space and how much is absorbed by the earth surface, by using only a very simple formula.
It can do so, not only based on the radiation that is emitted from the surface, but also based on the IR energy that is absorbed from the solar irradiation, and released by condensation of water vapour, containing latent heat, higher in the atmosphere.
This is normally a very complex calculation, involving temperature, pressure and IR wavelength radiative properties. But in the Fireworks calculation, they can be left out. 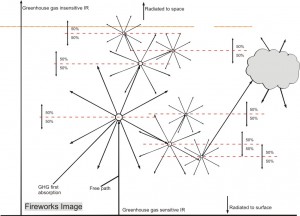 The great trick that enables this enormous simplification is to divide the atmosphere into layers, the height of which is defined as the average free path of greenhouse gas sensitive wave lengths, until they are absorbed by a greenhouse gas molecule. This definition incorporates all parameters that determine the free path,  such as temperature, pressure and wave length. As soon as you have established the number of layers, and the layer into which the energy is absorbed or inserted by condensation, the calculation is extremely accurate.

The problem is of course moved to the determination of the number of layers, and the place where the energy is inserted. But that problem too can be solved rather easily, be it so far a lot less accurately. I am convinced that climate scientists will be able to do this in a very accurate way, at least accurate enough to use the simulation to achieve greater insight, and for a lot of other purposes.

The first five chapters are explaining the simulation and the energy balance that is necessary to incorporate the other influences such as clouds and albedo in the Fireworks model, based on the simulation. They result in a Kiehl-Trenberth diagram containing the calculated energy flows in the atmosphere, and some conclusions about an atmosphere with twice the amount of CO2 in it.

The next four chapters contain the first building blocks for quantifying the influence of greenhouse gases on convection. These chapters too contain a number of innovative new ideas that contradict generally accepted assumptions, both in sceptical and alarmist circles, about convection and the greenhouse effect.

The chapters 10 and 11 show how the Fireworks calculation can provide new insights on the radiative aspects of the Hadley cell and may even explain the so called “Missing Tropical Hot Spot”.

First presentation at ICCC7 in Chicago, May 2012
On Monday evening, after a long day of lectures, I was given a chance to introduce the Fireworks concept to a few highly respected climate sientists, four of which were conference speakers.

Because it had been a very tiring day, I tried to be brief and to the point, concentrating on the Fireworks simulation. But the calculation of the emission of latent heat of the Hadley Cell to space, based on the simulation, certainly met with a lot of interest too.

Most of the attendants did not see the radiation theory as their core competence and were careful in formulating their reaction, but in general my feeling was that the theory was considered to be promising.                              END_OF_DOCUMENT_TOKEN_TO_BE_REPLACED

1. The Fireworks Theory for greenhouse gases
Explains how it is possible to describe the atmosphere by layers, defined by the average optical free path of greenhouse sensitive IR wavelengths.
This takes temperature and pressure out of the equations and enables very accurate but simple radiation calculations.

2. The Fireworks atmospheric simulation
Describes a simulation spreadsheet that calculates all radiation transfer through the atmosphere.
Demo included!

3. The Fireworks simulation: Layer determination
Explains the way the layer thickness and the number of layers have been calculated so far.

4. The Fireworks simulation: Climate sensitivity
Full shape present-best simulation, in an attempt to quantify the radiative aspect of a CO2 doubling.
Full size demo included for the die-hards!

5. The Fireworks balance sheet: Climate sensitivity of CO2, including clouds
Energy balance sheet, implementing the radiative data from the Fireworks simulation, and including all other climate variables. The outcome is interesting, but for now quantitatively very questionable.

6. Convection and the thermohaline circulation
Some finger exercises for chapter 7: convection in fluids, i.c. the ocean conveyor belt

11. Analysing The (Missing?) Tropical Hot Spot
Explains why there is no need for a tropical hotspot to exist, despite the adiabatic lapse rate. The analysis is based on the calculations of chapter 10 and denies the statements made by the mainstream scientists defending the physical necessity of the hot spot.

1. The Fireworks Theory for greenhouse gases

IR radiation behaviour
I started with imagining how IR radiation would behave when radiated from the earth’s surface.
Of course some wavelengths will radiate directly into space through the IR window.
All the rest would at a certain point be absorbed by a greenhouse gas (GHG) molecule.
Once absorbed, in an equilibrium situation, the same amount of energy would be re-radiated
evenly in all directions by the molecule.

Note: in the equilibrium situation, the frequency of the absorbed IR energy is “lost”, since
we assume all GHG molecules in a certain volume to have the same temperature, and they all
will radiate out energy in their own spectrum. So the spectrum of the re-radiation is only
related to the concentration of the different GHG at that particular place, not related to the
absorbed wavelength.

Since we are only interested in the vertical energy transport by radiation, we assume that only
the vertical component of all that radiation is effective, so effectively 50% of the energy radiated
from that molecule ends up going upwards, and 50% going downwards.

Note: since the earth is a sphere, some radiation that is downwards but very close to
horizontal, will still escape into space. This effect should be calculated to increase the accuracy
of the model.

This radiation in its turn will be absorbed by other GHG molecules, which in their turn will reradiate
into all directions. The graphic representation of that mechanism looks like fireworks, thus providing a
suitable name for my theory. 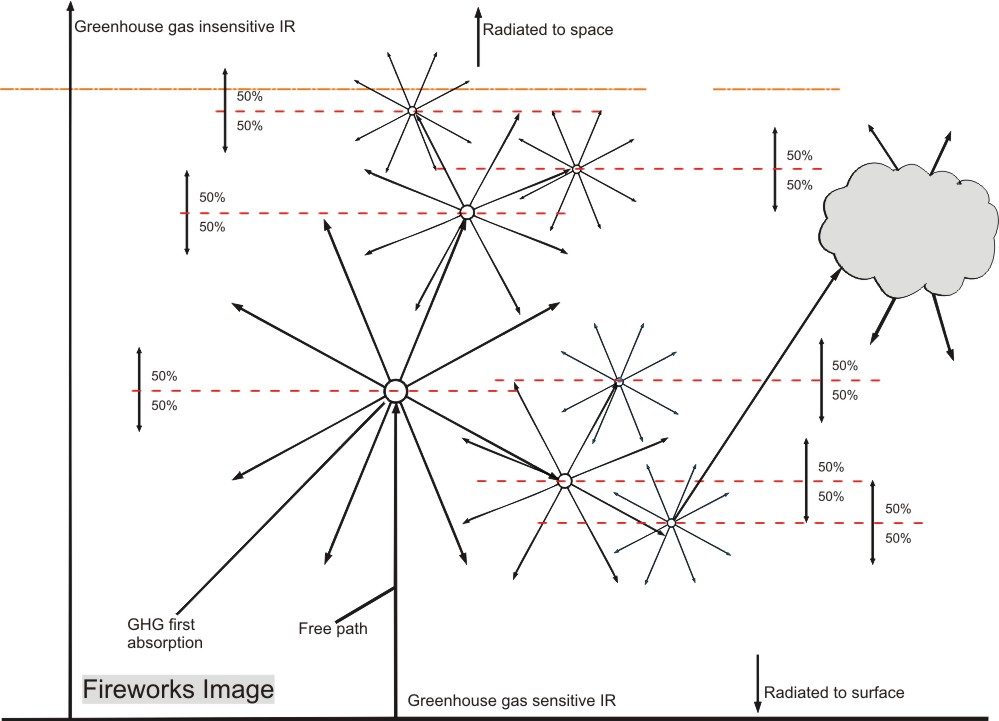